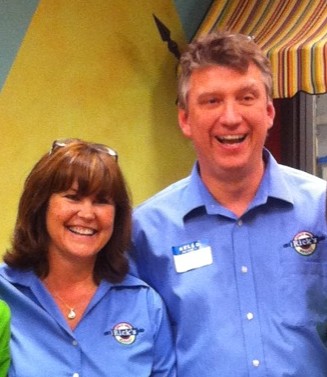 Rick’s Bakery started out as a part-time gig for Rick while he was finishing up his electrical engineering degree at the University of Arkansas in 1980.  Rick’s thoughts were to sell the business in six months and split the profits with his business partner.  In three months, however, they found out that they were better friends than business partners, so Rick bought him out and became the owner and operator of his own donut shop!

Rick was now the only employee.  Waiting on customers, frying the donuts, and filling the cases proved to be more than he could handle alone.  His wife, Sharon, stepped in, quitting her job (and their only secure source of income at the time) to help Rick build the business.  They fried donuts in the middle of the night until closing at noon, and then went door to door selling any extras to make money for the next days’ supply of ingredients.

After two years Rick and Sharon decided to expand and add cakes so they hired a cake decorator and started taking cake orders.  The decorator left abruptly and there was a wedding cake to attend to for that very weekend.  Sharon had to learn how to decorate, and fast!  Fortunately, Sharon caught on quickly, becoming a skilled decorator.

Business was booming- the little bakery on the corner was busier than ever!  Lines of customers were out the door every day.  Rick and Sharon were ready to expand, so they opened a store in the mall with three other stores around Northwest Arkansas soon to follow.  Their bakery empire consisted of five stores and they were only in their early twenties.

The strain of having five stores proved too much for them and their bank accounts and they filed for bankruptcy.  Financial advisors, friends, and other bakery owners said they should not re-open but Rick and Sharon couldn’t stand the fact that they owed money and weren’t going to have it if they didn’t re-open.  Against all advice, they stubbornly re-opened.  It took several years of hard work and sacrifice to pay off the IRS, distributors, and other vendor debts.  They sacrificed their house and cars, renting for a while with the help of their parents.  Rick and Sharon still remember the day that they received the letter in the mail that cleared all the liens against them.

With the decision to re-open, they returned to the very small, one bakery operation.  It was just Rick and Sharon for a while, but as business grew they did eventually add employees to help.  The bakery was once again doing well and bursting at the seams.

In 2001 they decided to expand into the current location, once again against the advice of others, since they would lose the prime corner location.  The corner location only had 1800 square feet and they were given the opportunity to move to 5900 square feet.  After a year of construction (which Rick did himself) they moved to the new location.  Renovations to this location in 2006 expanded the cake department to include the current cake walk and decorating area.

In a fun twist of fate, in 2015, the building that Rick’s Bakery first occupied became available again!  Rick and Sharon reclaimed that space and decorated it as a party room to host all types of cake, cupcake, and cookie decorating parties.

Rick and Sharon have dedicated themselves to the bakery and it shows in their history and I’m sure in what is yet to come!

Treat your furry friends! We are now baking DOG TREATS!!! Multiple flavors are available!
We now have Take-and-Bake sausage rolls in regular and jalapeno. Take some home today!
Parents - Rick's offers a variety of birthday packages delivered to your student. Give us a call to customize your package.
With fall on the way, pumpkin is back- Rick's has pumpkin petit fors, cupcakes, and donuts!
Do you love warm cookies? Rick's now offers take-and-bake cookie dough! Try some today!
Try our latest gourmet cupcake: salted caramel - fluffy white cupcake with sweet caramel center topped with creamy white icing and sea salt.
toggle
Toogle Down